For assessment of the plastic limit of soil sample

The plastic limit of a soil refers to the water proportion of the soil beneath which it ends to be plastic. It then starts to crush when rolled into filaments of 3mm diameter.

2. Now, blend the soil with distilled water in an evaporating dish or on a glass plate so that it becomes plastic ample to shape into a tiny ball.

3. Now allocate some time for the plastic soil mass for the process of maturing. For some fat clay, this time period could even exceed a whole day.

4. Take approximately 8g of the plastic soil, after that roll it with fingers on a glass plate. The rate of rolling has to be tentatively 80 to 90 strokes per minute so that it forms a thread of 3mm diameter measuring one stroke when the hand shifts forward and backward to the originating point.

5. In those cases, where the diameter of the thread is just minimum than 3mm exclusive of the cracks it indicates that the water proportion is greater than the plastic limit. Rub the soil to decrease the water proportion and roll it one more time into the thread. Now undertake the process once again of alternate rolling and kneading till the point where the tread crumbles and the soil could no longer be rolled into the form of thread.

Note: If the process of crumbling happens at the point where the thread has a width mildly higher than 3mm it might be understood as plastic limit, given the soil had been rolled into a thread of dimensions 3mm diameter just before the kneading. We cannot try to produce failure precisely at 3mm diameter. 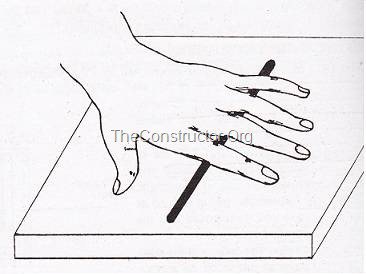