These are the terms utilized for various parts or components of a staircase:

Steps are constructed out of riser and tread.

It refers to the part of the stairway on which we step. It is built to the same dimensions and specifications (thickness) like in case of the other flooring. The tread “depth” is calculated from the exterior edge of the step to the perpendicular “riser” amongst the steps. The “breadth” is calculated from one side to the another side.

Riser: The perpendicular segment amongst each one of the tread on the stairs. It might be absent in case of “open” stair effect.

It refers to the edge part of the tread that bulges above the riser underneath. In such cases where it is not present. It suggests that, measured evenly, the aggregate “run” longitude of the stairs is basically the aggregate of tread lengths, since the treads precisely overlap one another partially. 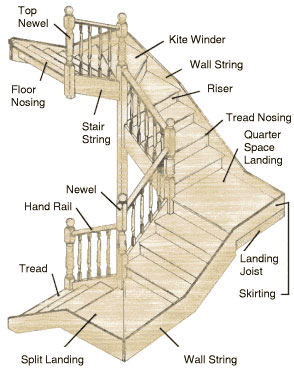 In those structures, where the stairs are open on one or are open on both of the sides, the initial step ahead of the lower floor could have greater width in comparison to the other steps and rounded. The balusters characteristically create a half circle about the perimeter of the rounded segment and the handrail consists of a parallel spiral known as “volute” that gives support for the top of the balusters. In addition to the enhancement of the appearance, starting steps permits the balusters to form a wider, more sturdy foundation for the end of the handrail.

Handrails that normally cease at a post at the base of the stairs could be not so rigid and sturdy, even when it has a thick post. A double bullnose could be utilized in those cases when the both sides of the stairs are open.

Stringer, Stringer board (or just String):

It refers to the structural member that gives support and foundation for the treads and risers. Normally, we can find two kinds of stringers, each one on side of the stairs; even though the treads may receive the necessary support through different other techniques. The stringers are in some cases, notched so that the treads and risers can be fitted into them.

The stringers on open-sided stairs are made in such a way that they usually open themselves so that the treads are noticeable from the sides as well. Such stringers are known as “cut” stringers. The stringers on a closed side of the stairs are also closed, because of the support they receive for the treads which are routed into stringer.

Winders refers to those steps that are slenderer on one side when compared to the other. Those are utilized in order to alter the direction of the stairs without landings. The series of winders create a circular or spiral stairway, in that way.  In the cases, where there are three steps are utilized to turn a 90° corner, the mid step is also known as kite winder or as a kite-shaped quadrilateral.

Trim (for example, quarter-round or baseboard trim) is usually exerted on places where walls intersect with the floors and most of the time below treads to not reveal the reveal the point where the tread and riser meet. Process of shoe molding might be utilized amongst where the lower floor and the original riser intersect. Trimming an initial step is a unusual test as the last riser beyond the lower floor is curved.

Highly elastic plastic trim can be utilized to fulfill this objective, nevertheless wooden mouldings are till date utilized and are basically cut from a singlular part of curved wood, or they are bent with laminations Scotia is concave moulding which is beneath the edging in the middle of the riser and the tread on top of it.

Angled member for handholding, as differentiated from the perpendicular balusters which grip it up tightly for the stairs that are open on one side; there is regularly a railing on both of the sides, occasionally it is present on one side or it is not present at all, in the cases of wide staircases, there is occasionally also one present in the middle point and there are possibilities for others as well. The word “banister” is normally utilized while referring to just the handrail, or occasionally the handrail and the balusters or in some cases only the balusters.

A volute refers to a handrail end component for the bullnose step that bends interiorly in a spiral way. A volute can either be right or left-handed contingent on which what side of the stairs the handrail is as faces the stairs.

Replacing a complete spiral volute, a turnout refers to a quarter-turn rounded end to the handrail.

By gooseneck, we mean the perpendicular handrail that connects an inclined handrail to a handrail with greater stature on the balcony or landing.

Where the handrail ceases in the wall and a half-newel is not utilized, it can be trimmed by the help of a rosette.

Wood handrails regularly comprise of a metal core to give additional strength and rigidity, particularly in those cases when the rail has to bend counter to the grain of the wood. The antiquated word for the metal core is “core rail”.

Baluster is a word for the perpendicular posts that provide the support for the handrail. In the general terms, they are simply called guards or spindles. Treads usually require two balusters. The second baluster has to be nearer to the riser and it also has to be taller than the first one. The additional stature in the second baluster is characteristically in the mid point between decorative components on the baluster. That way the base decorative components are lined up with the tread and the crest elements are lined up with the railing angle.

A very big post or baluster is utilized to anchor the handrail. Owing to the fact that it is a structural element, it spreads underneaththe floor and subfloor to the base of the floor joists and is fastened right to the floor joist. A half-newel might be utilized where a railing ceases in the wall. On seeing, it normally looks like half the newel is entrenched in the wall. For open landings, a newel might spread underneath the landing for a ornamental newel drop.

An ornamental cap to the crest of the newel post, specifically at the end of the balustrade.

In those systems, in which the baluster does not initiate at treads, they go to the baserail. It permits for similar balusters, preventing the second baluster problem.

An ornamental filler piece on floor in middle of the balcony railing and balusters.