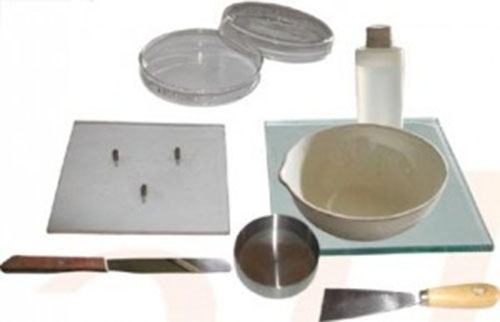 Aim: To Determine the Shrinkage Limit of a Specimen of the Remoulded Soil

1. Shrinkage dish with a flat base, with dimensions 45mm diameter and 15 mm stature

2. Two big evaporating dishes with dimensions of about 120mm diameter with a pour out and flat base.

3. One small mercury dish with dimensions of 60mm diameter

1. First of all, take a specimen of mass approximately 100g from a methodically blended soil passing 425

2. Now, take approximately 30g of soil specimen in a big evaporating dish. Blend it with distilled water so that if forms a smooth paste which could be freely functioned so that it doesn’t entrap the air bubbles.

3. Now take the shrinkage dish. Clean it thoroughly and compute its mass.

8. Now, leave the soil to dry the soil in the shrinkage dish in air until the huw of the pat transform from dark to light. After dry the pat in the oven at 105 to 110 0C to persistent mass.

9. Leave to cool the dry pat in a desiccator. Eliminate the dry pat from the desiccator after cooling, and mass the shrinkage dish with the help of dry pat to control the dry mass of the soil (

10. Positon a glass cup in a big evaporating dish and pack it up with mercury. Eliminate the additional mercury by pressing the glass plate with spikes determinedly over the crest of the cup. Now, thoroughly wipe off any mercury sticking to the outside of the cup. Detach the glass cup full of mercury and position it in alternative evaporating dish making sure not to spill any mercury from the cup.

11. Now, take out the dry pat of the soil from the shrinkage dish and saturate it in the glass cup packed with mercury. Pay attention not to trap air under the pat. Press the plate with prongs on the crest of the cup strongly.